i've been a mod for various fan projects since 2016! this includes fan weeks, zines, and secret santas. i've also run social media for multiple school positions, and have experience in both the traditional and independent publishing industry.i've helped to moderate events with over 400 people participating, and know my way around discord, google apps, notion, and airtable. i have been the lead or co-lead of multiple zines, and was the lead mod of silver lining, which donated over $2,000 to ipscan.

a ♦ next to a role in the 'position' section indicates that my job in that area is complete for this project.

in alphabetical order. zines that were cancelled before creation started/was finished are not included. zines i dropped out of are not included.a ♦ in the status section of an in-progress project indicates that my creative work for the zine has been completed! 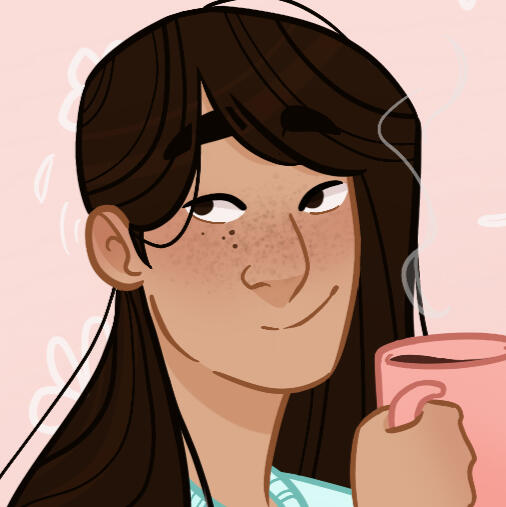 TESTIMONIALS
"murphy's law in a person" - krissey
"zines. clay terran truther. always going 'oh fuck i gotta go do duolingo' during vc" - luka
"has quite possibly the least efficient way to have a hyperfixation" - miryam
"you're a bad movie connoisseur who likes to gawk at trainwrecks" - miryamFAQ
"what does the 🔇 emoji in your status/display name mean?"
‣ if i put the mute emoji in my name or status, it means that i am alright, but offline for personal or mental health reasons. i'm ok, but i won't be responding to messages, asks, or posts."why a bigcartel and an etsy?"
‣ etsy collects vat for uk customers who would prefer that over paying customs when the package arrives.
additionally, etsy has marketplace and listing fees, meaning that all my products are priced higher on etsy than on bigcartel (usually only about $1-2). however, etsy has a marketplace, meaning people can find me there, whereas i have to drive all the traffic to my bigcartel on my lonesome.
people are welcome to buy wherever they prefer!

things i like but am not like currently breathing for
‣ les misérables (all versions)
‣ anastasia (movie and musical)
‣ like a million other musicals
‣ bbc merlin
‣ percy jackson (always there)
‣ miraculous ladybug (season one)
‣ whatever i'm reading on my goodreads probably!

i'm starting to do more book reviews! here's a list of places where you can find me — i try to post pretty much everywhere, so feel free to choose your favorite book sharing site and ignore the other ones!

disclaimer: all opinions are my own and are not meant to be reflective of an entire group. my reviews are never meant to target any readers or authors. if it's not my jam, it might be yours! and that's super cool because we're here cause we love books!

my reviews are also posted on the websites's blog!
you can also find me at
‣ netgalley: bloomingtea
‣ booksloth: bloomingteaadditionally, i also sometimes talk about books on my twitch! please note that these are unfiltered conversations about books, usually contain spoilers, and i usually didn't like the book very much.

i am looking for representation!i've been writing for as long as i can remember, and have recently been pursuing it as a career! thank you to all my friends and family for the support they've given me because it's been a ride ♡i'm always writing and working on different things, so definitely check out my social media for more information on what's happening. overviews linked below for my major wips!current projects:

Ren has been in love with his best friend for the past three years. He has no intention of confessing, but he can't seem to move on.
Calliope has spent most of her life dancing. She's decided to put other interests before it now, but it's hard to let go of something she fought so hard for.
Ingrid plans to start over in college, to go beyond what held her back in high school. It's much easier in theory than in practice.Less Than Three is a collection of three short stories about a group of friends. Together, they shoulder their way through romance, all-nighters, and the occasional dragon.

note: print versions are currently only available to buy through amazon. sorry for the inconvenience!

book one: being edited

Rade is second in line for the throne. They pretend to follow the rules and sneak out of sword fighting lessons to read in the library. They make their sister smile as she stresses over her upcoming engagement. Their parents are almost unbearable, but they're making do.Then they get kidnapped.A trilogy about royalty, pirates, politics, and learning how to create a better world.

“I have this theory,” Zane says, “that all poptarts taste better when they’ve been toasted. Aside from strawberry, that is. Can’t improve on good original perfection.”Jere was already depressed before the world ended.
Now he and his friends have to travel cross-country with only a map and a demon cat before the unleashed magic poisons the people they love.

One thousand three hundred eighty-three days ago, Liam asked Jaz out between the cafeteria vending machine and a trash can. One hundred fifteen days ago, they blocked each other’s numbers. The apocalypse starts in three, two, one—

swans, sparrows, and other flying creatures

Transferring in the middle of senior year wasn't in Milo's plans, but now he's in the middle of Maine living with his aunt and starting over. He's got his favorite book to ground him and not much else, until an eccentric group of friends decides he's part of their group. But what about the mysterious boy who Milo ran into on his first day? The one who no one knows much about and always seems to carry a storm cloud with him? What's his deal? And why does Milo care so much?